skip to main | skip to sidebar

The Real Winner in Israel

The real winner in Israel

Everyone is talking about the successful -- albeit lackluster -- performance of Ehud Olmert's Kadima Party in Tuesday's Israeli elections. Kadima won a marginal victory, gaining 28 seats in the Knesset, and giving Olmert the opportunity to form a government.

But, in a sense, the real winner of the elections was Avigdor Lieberman, leader of Yisrael Beiteinu, which pushed past Likud to become one of Israel's major political parties -- turning Lieberman into a potential kingmaker. This is a remarkable development because Lieberman's party stands for one thing: an Israel finally cleansed of the remainder of the indigenous Palestinian population.

Lieberman was born in Moldova in 1958. In 1978, he moved to Israel. Because he is Jewish, he was eligible for instant citizenship under Israel's law of return.

It was evidently not enough for Lieberman that, as a Russian-speaking immigrant fresh off the plane, he was instantaneously granted rights and privileges denied to Palestinians born in the very country to which he had just moved (not to mention those expelled during the creation of Israel in 1948). The very presence of an indigenous non-Jewish population in Israel was, in effect, unacceptable to him. In 1999, he formed a party called Yisrael Beiteinu ("Israel our Home"), made up largely of other Russian immigrants for whom the presence of Palestinians is also unacceptable. Lieberman's party believes what all Israelis believe: that Israel is a Jewish state. Unlike the more respectable Israeli parties, however, Lieberman's party is willing to add that because Israel is a Jewish state, non-Jews are not welcome. Even if they were born there.

Because Israel has -- somewhat conveniently -- never declared its own borders, Lieberman proposes that the state's borders be drawn in such a way that Jews are placed on one side of it, and as many Arabs as possible on the other. Ethnic purity is the operative ideal. The mainstream Israeli parties, and even right-wing politicians such as Moshe Arens, denounce what they regard as Lieberman's racism.

The difference between Lieberman and mainstream Israeli politicians, however, is not that they believe in cultural heterogeneity and he does not: for they are as committed to Israel's Jewishness as he is.

The difference, rather, is one of degree. Mainstream Israeli politicians agree that a line of concrete and steel ought to be drawn with Jews on one side of it and as many Arabs as possible on the other. But they argue that it is OK to have a few Arabs on the inside, as long as they behave themselves, and don't contribute too heavily to what Israelis refer to ominously as "the demographic problem." Contenting themselves with the platitude that Israel is a democracy, mainstream Israeli politicians ignore the fact that, in matters of access to land, questions of marriage and family unification, and many of the other normal rights and duties associated with citizenship, Israel's Palestinian minority faces forms of discrimination not faced by Jewish citizens of the state. This is hardly surprising.

As the state of the Jewish people, Israel is, after all, the only country in the world that expressly claims not to be the state of its actual citizens (one-fifth of whom are non-Jews), let alone that of the people whom it governs (half of whom are Palestinian). Non-Jews have always been, at best, an impediment to Israel's Jewishness. The only question has been what to do about them.

The point, however, is that -- as the Israeli journalist Gideon Levy points out -- Zeevi and Lieberman are no more racist than mainstream politicians such as Ehud Olmert. The difference is simply one of modalities. "Lieberman wants to distance [Palestinians] from our borders," writes Levy; "Olmert and his ilk want to distance them from our consciousness." Racism, Levy concludes, is the real winner of the 2006 elections.

The question is whether this represents some new development, or merely a sign that Israeli politics are becoming truer to the nature of Israel itself -- a reminder that the quest for ethnic purity, no matter how it's dressed up, is inherently ugly.
Posted by Saree Makdisi at 5:45 AM


RICHARD ROGERS, the noted British architect, was recently summoned to the offices of the Empire State Development Corp. to explain his connection to a group called Architects and Planners for Justice in Palestine. Empire State is overseeing the redesign of New York's $1.7-billion Javits Convention Center, and Rogers is the architect on the job.

According to media reports, Rogers has sparked the anger of various New York politicians and Jewish organizations for what he now claims was only a fleeting association with Architects and Planners for Justice in Palestine. The group has taken the "outrageous" position that Israel's West Bank barrier (sometimes referred to euphemistically as a "security fence") is, well, problematic — because most of it is built not on Israel's 1967 border but within the West Bank; because it violates international law; because it separates farmers from their land, one town from another, people from their doctors, children from their schools; and because it generally wreaks havoc on Palestinian life. 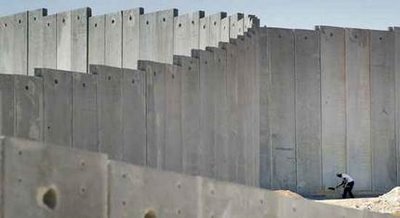 Members of the group have proposed a boycott of Israeli architects and construction companies working on the barrier, saying their involvement in such a project makes them "complicit in social, political and economic oppression" and is "in violation of their professional code of ethics."

Apparently anyone associated with such a position — in other words, anyone taking a principled stand in favor of human rights and international law — may have to count himself out of a contract for the Javits Center.

This is only the most recent example of Israel's American defenders — who will not tolerate any criticism of Israel — using their political clout to punish or silence dissident voices. Last month, the New York premiere of a play based on the words of Rachel Corrie, a young American who was crushed by an Israeli Army bulldozer while protesting the demolition of a Palestinian home, was indefinitely postponed for fear that some might find her words "offensive."

Naturally, Rogers has been desperately trying to distance himself from anything that might stand in the way of his retaining the Javits project, including severing his ties with the group and stating that he does not back a boycott.

Israel's barrier is fine, Rogers now says. In fact, he's now in favor of it. Further, "Hamas must renounce terrorism," he told the New York Post. "Hamas must recognize Israel's right to exist. Just making a statement is not enough. They have to back it up."

Alas for Rogers, such effusion may not be enough to save his contract.

"His position on Hamas is not relevant," said Malcolm Hoenlein of the Conference of Presidents of Major Jewish Organizations. "The relevant issue is a group that is convened for the purpose of activities detrimental to a democratic state…. [The Javits Center] carries the name of someone whose legacy is exactly contrary to such views. It certainly would be offensive to his legacy, and it would be an offense to the people of New York, who reject what that group stands for."

What that means, presumably, is that Sen. Jacob Javits and the people of New York do not stand for justice, peace, humanity and the law but injustice, war, inhumanity and illegality — for what else could "exactly contrary" signify?

Unless brave New Yorkers — including members of the organizations in whose name this position is being taken — stand up and refute it, this is how the record will remain.

Yet all I hear, unfortunately, is deafening silence. Or maybe what I hear is what Wordsworth once called "the still sad music of humanity."

PS: It was reported today that New York politicians and Jewish leaders have given their approval for Rogers to retain the Javits project. That did not prevent Rogers from making a few final and gratuitous genuflections: "There were misunderstandings on both sides— certainly there were misunderstandings on my side," he said. Of Israel, he said: "I have always been a strong believer in that state . . . . I do believe there's a great future for Israel, and I'm a friend of that country."
Posted by Saree Makdisi at 6:33 AM